Buenos tardes from our apartment, or “piso” in Spanish. Here’s a photo (right)  of our end of Calle Mayor in the Cosco Antiguo, the Old City of Alicante. I have yet to learn how old the buildings are in this area, but much of the city was destroyed by cannon fire from English ships in 1691, so most are likely 18th or 19th century, although a few older structures survived the battle. More history later.

The Cosco Antiguo, as you can see, has narrow streets, some of cobblestone. Just wide enough for one car, or most likely for two hombres with their burros to pass each other. Vehicle access is restricted to those with special permits.

Below is a shot of our building, Calle Mayor, 43. It’s a very comfortable apartment with two bedrooms and two baths. We’re in piso 1 on the first floor, but European “first” floors are what we would call the second floor in the U.S. Here, though, when you enter from the street you are on the ground level, or floor 0. We’ve checked out the rooftop terrace, from which we can see most of the Cosco Antiguo and Centro barrios, and just a small part of the Mediterranean Sea. Looks like a great place to hang out with a glass of wine in the afternoon.

It’s about 1600 as I write this. If you were in the military, or if you’ve spend much time in Europe, you will recognize that as 4 p.m. Lunch is over and siesta has begun. Most shops, and some restaurants, close around 2 or 3 p.m. and re-open after 5 or 6 p.m. Spanish families generally have their main meal of the day at lunch, anywhere from 1 to 3 p.m., then a light dinner or tapas after 8 or 9 p.m., often followed by a stroll through the plaza or down the rambla. It’s not unusual for tapas bars to be full of people at midnight or even later. We’re not fully acclimated to siesta yet (although Leslie is napping right now!) but we think it’s highly civilized!

We started our day early today (Friday, Oct. 28) with a walk along Alicante’s most popular beach, Playa del Postiguet, for sunrise at about 8:30 a.m. Lots of local folks were out, too. Some were jogging, some walking dogs, a few were even swimming. We were very comfortable in T-shirts. High today, about 74 degrees F. Here’s what it looked like this morning during our walk:

Later we roamed through Central Mercado, an indoor market place with hundreds of vendors selling fresh fruits and vegetables, meats and cheeses, seafood, and pastries. This is where the people of central Alicante come to buy food.

The fruits and vegetables area brought to mind our Saturday mornings at the Downers Grove farmers’ market the past several summers. But this was much bigger, with more vendors. At one stall, we picked up some lemons, apples, celery, broccoli, potatoes, a big red pepper and a bunch of seedless grapes– all for 8 euros, less than $10.

We still have some exploring to do in our temporary home, but so far we like Alicante. Hey, it’s been almost a week and we have yet to turn on any AC or heat. We could get used to this.

We are now in Alicante, Spain, where it’s nice and warm. No jacket required here! Our “vacation,” traveling through the UK and spending time in Barcelona, is finished. We have moved into our temporary quarters at Calle Mayor, 43, first floor, apartment 1. We are in the Casco Antiguo, or Old Town, with narrow cobblestone streets and very old buildings. Our apartment, however, is modern and cozy. More on that later.

First, a bit about Barcelona, since this is partly a travel blog. We visited the Gothic Quarter and walked down the famous Rambla. Some of the shops and restaurants are for locals, while some are just there to take the tourists’ money. Fascinating to see the stalls in the Mercat de Saint Josep de la Boqueria. You can buy candies, pastries, seafood and the Spanish “jamon iberico,” the thinly sliced cured ham that comes only from black Iberian pigs. Sabroso!

But the highlight of any trip to Barcelona is seeing Sagrada Familia. This is the cathedral designed by Catalan architect Antoni Gaudi. Construction began in the late 1800s and continues today. You can see construction cranes in any photo you take of this building. The authorities say they expect completion in 2026.

It’s unlike any church or cathedral anywhere. You’ve probably seen photos of the soaring spires, the crazy architecture and the modern statues depicting the life of Christ.

But your jaw drops when you go into the basilica and look up.

Gaudi designed the stained glass windows differently for the east and west sides of the basilica. On the east side, struck by the morning sun, he used blues and greens. Cool colors. On the west side, he went with warm colors of red, yellow, orange. The difference is stunning.

We were there about 3:30 p.m. The sun coming in those west windows was dazzling. So bright I could not get a good photo. Here are the east windows.

Heavily influenced by nature, Gaudi designed the supporting pillars in the center of the church to look like trees. You can see how the branches spread out as they approach the ceiling. Yes, I did get a little dizzy looking up, but you have to look up!

Then there are the statues on the two main facades. They are stark and modernistic. The photo below shows Christ on the cross, but looking up toward Heaven, not down as in most crucifixes. Below that are Roman soldiers, but they appear to be wearing midaeval style armor. On either side of this sculpture are statues of Judas, who betrayed Jesus, and Peter, who denied Him. This facade is all about Christ’s death. The opposite facade is about the Nativity.

Barcelona practically worships Antoni Gaudi. You can see more of his buildings throughout the city. His unfinished cathedral draws millions of tourists, and his style is now Barcelona’s style. Meanwhile, the English word “gaudy” means something that does not look stylish at all.

When Gaudi died in 1926 in a tram accident, thousands attended his funeral. He is buried in the crypt section of his cathedral. He saw the structure as his gift to God.He once responded to a critic who thought the work was taking too long, saying, “My client is not in a hurry.”

The crypt, below the main level, is actually the only place were services are held. There is an altar set up there, and priests say mass daily. There is also a small chapel behind the nave set aside for prayer. Leslie and I spent some time there, and it was awesome.

Two years ago at the Hinsdale Wine Shop, we tasted some fantastic Spanish wines and met the winemaker, Pepe Raventos of Raventos i Blanc. We told Pepe back then that we hoped to relocate to Spain in about two years, when I retired. He signed one of the bottles we bought that night, “See you in two years!”

It took a little more than two years, but today we saw Pepe again when we spent a few hours touring his family’s estate, about a 40-minute train ride west of Barcelona in Sant Sadurni d’Anoia. Pepe is the 22nd generation of his family to run this winery. His ancestors started out in 1497. That’s not a typo. Over 500 years in the same family.  Here we are with Pepe. The bust behind us is of Pepe’s grandfather.

We saw some vines that are about 70 years old, as well as some new plantings, and we met the two mules that help out on the property. Our guide was Anna, a young English woman on Pepe’s staff who is highly knowledgeable about wines. She’s off next week to Hungary to promote Raventos wines in that country. 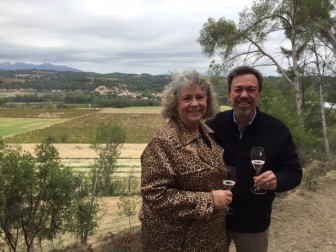 Anna treated us to some sparking wine as we  looked over the vineyards with Montserrat in the background, but nearly shrouded in clouds.  It was a bit chilly for this time of year.

Pepe is moving his family’s business into a more organic style called biodynamic. It’s almost as if he’s guiding his family’s business into the future by going back to techniques from its storied past. Please take a look at their website, http://www.raventos.com, to learn about biodynamics and their fabulous sparkling wine, or cava in Spain. I think you will be impressed with the materials on the website, especially the video. Definitely watch the video.

We know Pepe thanks to Sean Chaudry at Hinsdale Wine Shop. If you want to purchase some of their very fine wines, head for Hinsdale and tell Sean you’re friends of Mike and Leslie Rogers. I’m sure he’ll sell you some of Pepe’s good stuff.

Two more days in Barcelona, then the vacation is over and we head for Alicante. There, we begin six weeks living in an apartment just off the central plaza (in Castilian Spanish, that’s pronounced, “plah-tha”) and only two blocks from the beach. We’ll be going to the markets like locals, walking around the plaza like locals, and visiting other places along the Costa Brava that could become our new home.

The vagabonding begins in earnest on Oct. 24!

We have sold our home of over 15 years and are ready to begin a great adventure, which begins by transitioning from a three-bedroom house to a tiny one-bedroom apartment!

We are Leslie and Mike Rogers, soon to be vagabond retirees. Leslie retired in 2007. Once Mike retires at the end of July, we begin our travels in southern Spain. From there, probably France, from there — who knows. We’re looking for a new home. Might be Europe, might be Central or South America. This is the research phase.

You can keep track of our travels through this blog. The adventure begins. There’s a lot more to come!

Let your friends know about the Vagabond Retirees Blog. We've heard from a lot of people who are also interested in living overseas and hope to learn from our adventures. If that's somebody you know, please pass along our address and encourage them to follow us. Thanks!
Loading Comments...